Was sent from the ghetto of Nowy-Targ, Poland, to the concentration camp of Krakow, Plaszow, where he worked on electrifying the fences for the Siemens Corporation. There were only Jews there at first.

He had been working in an oil refinery as a chemical engineer. During his incarceration by the Nazis, "I made my profession as an electrician."

In July, 1944, 40 Jewish electricians were sent to Natzweiler. "They put us to work in a commando in Neckar-Elz near Heidelberg. We spent 10 days in Natzweiler first while they were waiting for our orders.

"Neckar-Elz was a place of gypsum mines. The AEG, Siemens and BBC were the companies producing parts for the V1 and V2 missiles. We were slave labor. When we came, there was nothing there. We set up the installation for the Russian and French slave labor. The Luftwaffe were building these (missiles). We had better food: a little bread and soup. The camp was in the public school. We went in at 5 a.m. and came out at 8 p.m., seven days a week. Christmas was off. They even put a Christmas tree there.

"I was sent to the airport of Munich-Riem. I was doing manual labor-digging. They were testing the first jets. We were building the runways. We were camped at the stables at the racetrack.

"In the beginning of February, we went to Dachau on foot, then by train. I was liberated from Dachau. Just before the liberation, the 40 Jews only were taken back to Dachau. A few of the 40 died of typhus in Natzweiler. We didn't meet any Jews and we thought there were none left.

"We also compiled a list of all Jews in Dachau who remained alive. Dr. Abe Klansner (of Armonk, according to Rabbi Malcolm Stern), an American Rabbi and Chaplain, was one of the first to visit. Abe provided lists of Jews left in the neighboring camps and we compiled them. "

Joseph has a detached retina from a blow to his eye from someone taking lumber from him that he was carrying. He has no tatooed number on his arm, because only Auschwitz inmates had tattooed numbers. Compensation to Linden comes from Bavariuan Landesbank to Bank Leumi @ approximately $700 per month.

The National Archives have many of his documents and the living Museum to the Holocaust in NYC have other artifacts.

This is the Museum at Neckar:

And thanks to the KZ-Gedenkstätte Neckarelz e. V. museum courtesy Arno Huth for this map of the slave labor subcamps and the industries they served. 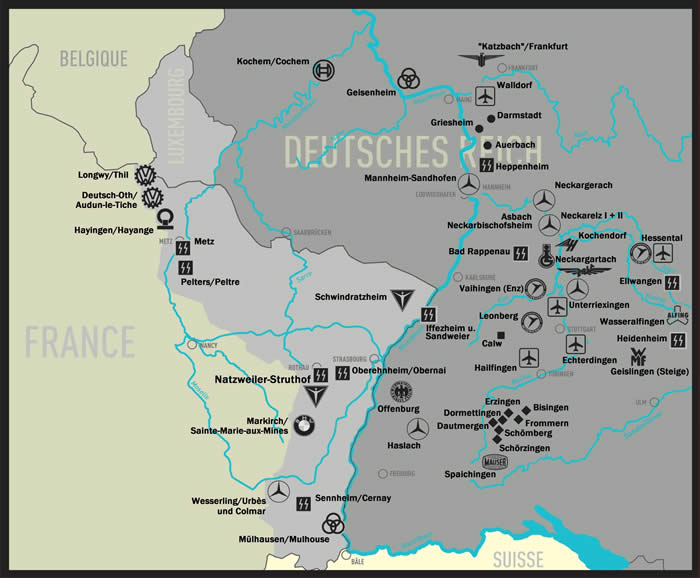 Back to Natzweiler-Struthof home page. Thank you.