The photographs that follow were taken during visits to the camp in 1985, on first visit to Natzweiler; 1992, visiting with Eugène Marlot, author of The Hell of Alsace

and in 1999 on the occasion of the annual June commemorative ceremonies, at which time Eugène's son Max scattered his ashes, according to the wishes of his father who had died the year before at 98 years of age.

Updated photographs are available from visits in 2016 and 2018. Photos and text copyright © Diana Mara Henry. Email for permission to use: dmh@natzweiler-struthof.com

Other vintage images from survivor Joseph Scheinmann ( AKA André Peulevey ) and other sources as credited.

Visitors to this site are welcome to share their photos and memories of the camp and to publish them here. Contact dmh@dianamarahenry.com

For audio-visual presentations and lectures about the camp, its 70 slave labor dependencies, resistance to the Nazis, secret Jews in the resistance and in the camps, the NN decree,

the medical criminals and their experiments and gassings, Roma and Sinti experience at Natzweiler, and other topics, please contact us as well.

Caution: some of the text and images that follow contains graphic description of atrocities

In this map, the Rhine River and Germany are at the very bottom, we are looking West. Strasbourg is the city at bottom right, Colmar is the city just visible at left.

Natzwiller, as the Alsatian spelling gives it, is a lttle town. Le Struthof is a farmstead and overlook of the valley where there was a ski resort and inn before WWII, and where, during the war, the inn continued to serve guests who could watch naked Jews and Gypsies being led into the gas chamber across the street. ( see Judy Chicago's Holocaust Project for more on this.)

Seated at the edge of the plaza just outside the gates of Natzweiler-Struthof, a visitor looks across the double

and two of the four remaining barracks at the bottom of the camp. Two more barracks were left standing at the top

of the camp, out of view to the right. The barracks at bottom contain the prison, the dissection room and crematorium.

The feature film THE YOUNG LIONS, was filmed after the barracks were demolished but attempts to shows the camp as it was constructed originally.

monument to the deceased.

More than 150,000 visitors tour the camp each year, including many school groups from Germany..

The radiant little village of Natzwiller. The Germans named the camp Konzentrationslager Natzweiler (spelling it their way) after this, the nearest town.

The French prefer to call the camp "Le Struthof" after the little resort located up the hill from the town.

This is the station where prisoners bound for Natzweiler were unloaded from trains amid vicious savagery and violence.

Prisoners recount how on their forced march from the train station at Rothau,through Natzwiller village, from behind a curtain they would see a woman wiping a tear,

or a hand would wave....Photos and text Copyright © Diana Mara Henry.

Natzweiler Signposts To the Concentration camp (known as Le Struthof, in France) and in another direction, to the Gas Chamber,

where was located the Bar-Restaurant that was patronized at the time of the gassings. Photos and text copyright © Diana Mara Henry 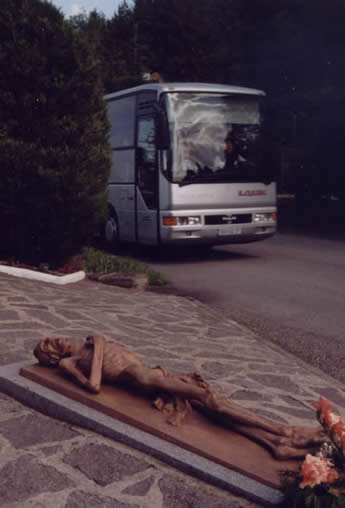 The signage at right reads: "This camp where so many martyrs died for their homeland is more than a cemetery. A most absolute dignity is required. Decent clothing and behavior are required. Smoking and pets are not allowed."

And on the right are posted the hours it is open to the public, and annual closure from December 25 to the end of February.

At the entrance to the parking lot a statue greeted visitors; today it is displayed within the museum that opened on site in 2005, the Centre Européen du Résistant Déporté/ CERD.

Morality rate for the prisoners at Natzweiler-Struthof concentration camp and its slave-labor dependencies (Kommandos) was approximately 50%.

The sign posted by the entrance to the camp reads: "General Delestraint Square. Head of the secret army, imprisoned at the Struthof from the 8th of March to the 5th of September, 1944. Died for France at Dachau, April 19, 1945."

Delestraint, general in charge of the resistance movements within France during the German occupation, was removed from Natzweiler with all the other prisoners, in September of 1944 in advance of the oncoming American troops, who discovered the camp, empty of prisoners that November.

He was shot just before the Americans liberated Dachau.

Figures from the European Centre on Resistance and Deportation for the numbers of prisoners from thirty European countries imprisoned at Natzweiler-Struthof, and the categories into which they were grouped by the Nazis.

and of the prisoners returning to camp, some carrying the wounded or corpses on their backs.

One of the two barracks left standing at the top of the camp houses a museum, which was burned down twice, it is assumed by Nazi sympathizers and former collaborators, perhaps out of ill-will for the harsh treatment former collaborators received while imprisoned there after the war.

The exhibits include large displays of the drawings of Henri Gayot, a survivor of the camp. The large drawing this visitor is scanning is called "L'Appel" and shows a frequently occurring experience of all the prisoners being called out

to stand for hours while punishments were meted out. In the drawing foreground are represented NN prisoners with X's on the back of their jackets.

The following quoted from http://www.historyplace.com/index.html

After the Wannsee conference officially determined the extermination policy of the Third Reich in 1942, all the concentration camps were ordered "cleansed of Jews" and sent to the killing centers at Auschwitz and Lublin.

Other Jews were brought to the KLNa specifically to be gassed in the gas chamber, as were Gypsies.

Photos and text copyright © Diana Mara Henry. Email for permission to use: dmh@natzweiler-struthof.com

The gas chamber was housed in this former farmhouse, at short distance from the prisoner barracks in the locale known as the Struthof.

The photo was taken from in front of the hotel that has been in operation since before, during and after World War II.

Diners on the outdoor terrace from this distance and vantage point saw nude Jewish prisoners being herded into the gas chamber through the door on the left, where tourists enter it now.

The ventilation chimney for the gas is at center of the building.

Banality of Evil/Struthof from The Holocaust Project : From Darkness into Light

August Hirt, ambitious and lazy, whose scheme to study the skulls of "Jewish Bolshevik commissars" was sent to the highest levels of the Third Reich: Rudolf Brandt, Dr. Wolfram Sievers, Adolf Eichmann,

and received funding from the Ahnenerbe Office, Institute for Military Scientific Research, Berlin, led to the gassing at Natzweiler-Struthof of 86 Jews imported from Auschwitz.

Photos and text copyright © Diana Mara Henry. Email for permission to use: dmh@natzweiler-struthof.com

(Warning: gruesome image follows this one)

The following image, taken just to the right of the gas chamber,shows the tiled vats where partially dissected bodies were stored in preservative solution.

Images taken right after the war showing the body parts in these vats were part of the testimony at the Nuremburg trials.

Not a member of a Jewish resistance per se, Joseph Scheinmann (AKA André Peulevey,) a German Jew originally from Munich, worked as a spy for the British MI6 and Free French networks

from his post as an interpreter for the Germans from the French National Railroad ( SNCF) headquarters in Rennes, under Louis Turban, from 1940 to 1942.

He was arrested by the Gestapo and spent 18 months in Gestapo prisons in Paris, 11 in solitary confinement, before being sent as an NN prisoner to Natzweiler-Stuthof and then to Dachau. The photo of him above is from after the war, in Paris.

André in a bowler hat, one of the disguises he was given during his clandestine trip to London at the end of 1941.

During his intelligence briefings in London, André met Claire who was in radio communications with bomber pilots at RAF headquarters.

They met again in Paris after the war, wer married and came to the US.

André with his son Michel and with his grandchild. A very great man. Read his story here.

Each year, commemoration ceremonies are held at the foot of the monument.

In 2005, a museum of the European experience in all the concentration camps was inaugurated, just outside the entrance to Natzweiler.

(Many versions of the Niemoller statement exist; his authorship is disputed but the sentiment remains.)